Violence is a major public health problem, claiming more than 50,000 lives a year in the U.S., and costing billions in medical costs, legal costs, and loss of productivity. Violence takes an emotional toll as well, leaving long-term emotional and psychological consequences. Its effects extend into the community, disrupting services and security for those who live, work and learn there. 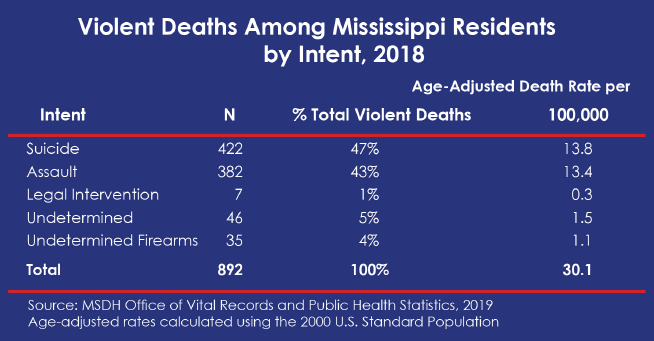 What Counts as a Violent Death

Homicides and suicides are the major classes of violent death counted by the Mississippi Violent Death Reporting System. Also counted are:

By gathering information on the circumstances of violent deaths, including the demographics of victims and suspects, their relationship, and the manner and place of death, the Mississippi Violent Death Reporting System hopes to gain insight on patterns and risk factors that lead to violent deaths. This in turn can lead to preventive steps that communities can take to deter future violent deaths. Violent death data can help demonstrate the need for state and federal funding for prevention efforts, and help guide suicide and violence prevention programs. The ultimate goal is to make communities safer and healthier to live in.

Find this page at http://msdh.ms.gov/msdhsite/index.cfm/index.cfm